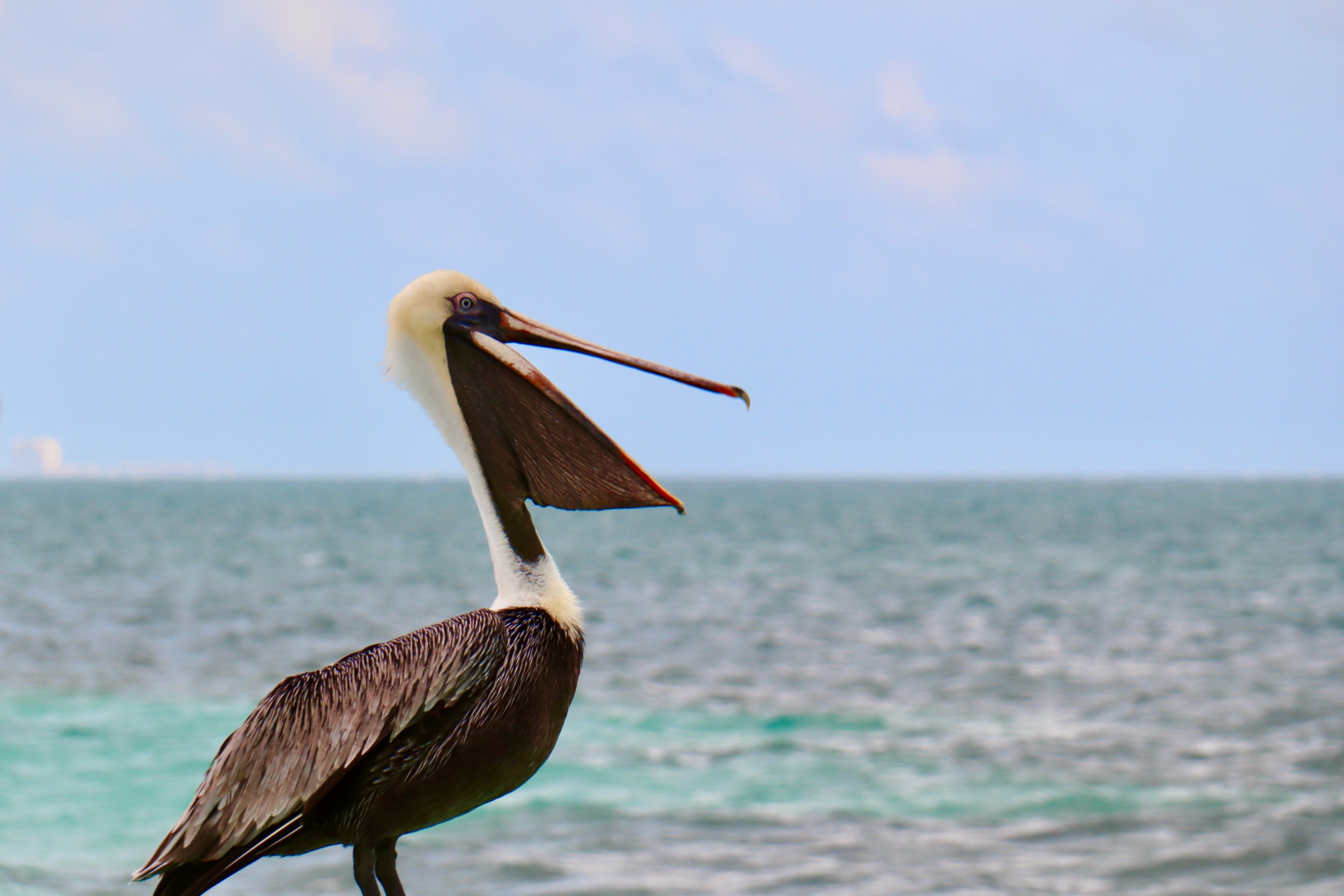 Brown pelicans are a common sight here in Florida, and even though I see them everyday now that I live down here, I still can't help but marvel at them. In fact, whenever I see a group of them flying by, I hear the theme song from Jurassic Park in my head. If you recall, at the end of the very first Jurassic Park movie, all the survivors leave the island on a helicopter. As they're soaring away to safety, pelicans fly alongside them, and it's in that moment you realize that pelicans look rather prehistoric. Here are some fun facts about this cool bird.

1. Have you ever noticed that some brown pelicans have white heads? Those are the adults. Just like our hair turns grey as we age, a pelican with white feathers has fully matured.

2. Ever wonder how the pelican doesn’t break his neck when he dive bombs the water to catch his lunch?
⠀⠀⠀⠀⠀⠀⠀⠀⠀
Brown pelicans have air sacs under their breasts that act like cushions (these also provide the buoyancy they need to float), and the way they rotate at the last minute protects their necks from impact. Pelicans also learn over time that a steeper diving angle results in better accuracy, so older pelicans are better fishers than younger ones. In the water, they open their bill and trap the fish in their pouch. The water drains out, and they gulp down their meal.

If you see gulls hanging around pelicans while they're fishing, it's because the smaller birds are looking for a free meal. They'll try to steal fish from the pelican's pouch while the pelican is draining water, and sometimes the gulls will perch right on a pelican's head.

3. When you're at the water and it's particularly calm, you'll notice pelicans will fly super low, almost as if their wings are just barely skimming the water. Slight changes in airflow patterns around the wing allow the birds to fly more efficiently and take advantage of an aerodynamic phenomenon known as "ground effect." Planes can do the dame thing over water, and the calmer the water, the easier it is. You don't see planes (thank God!) or pelicans doing this over land because it's too crowded with trees, buildings, and debris.

4. Just like the osprey, the pelican was once endangered because of DDT. The pesticide had the same effect on both birds: DDT caused their eggs to have thinner shells. Because a pelican incubates its eggs by standing on them to keep them warm, the eggs were cracking under their weight. Thankfully, pesticides were regulated, and pelicans have made a full comeback.

5. I imagine I'm not the only one who thinks pelicans are silly-looking birds. Have you seen one walk on land? And while they appear graceful in flight, they look sort of clumsy otherwise. I think that's why I enjoy watching them so much, especially when they're on the hunt. With the splash they create when they dive, you'd think a fifty-pound lab just leapt in the water. But even though a pelican can have a wingspan close to 8-feet, the largest of them only weigh about eleven pounds. That's just the right size for me to keep one as a pet in my bathtub. ; )